A portion of the Francigena Way near St. Thierry. (Photo by “Garitan” on Wikimedia Commons)

The head of the pilgrims’ hostel in Monteriggioni, Tuscany, gave us an amused look. We were five university students, none Italian, who had spent the entire day traveling ceaselessly to get to this miniscule hilltop village. All the work we’d done to get here wasn’t strictly necessary: we’d spent the past seven-and-a-half hours walking from another nearby town, San Gimignano, rather than catch the hourly regional bus.

Why? Because while studying at the University of Bologna for the year, each of us wound up hearing about the Via Francigena, a pilgrimage that leads from the Swiss-Italian border all the way to Rome, one way or another, and had decided that we wanted to try it out. Since it’s rather difficult to take off the multiple weeks needed to complete the entire trail, many Italians break the path into more manageable, weekend-sized chunks. This allows them to return home for the workweek after a strenuous but fulfilling weekend hike. After classes were over for the school year, we – two French, one German, one Norwegian, and one American – decided to do one such hike.

The Via Francigena is an excellent way to see the Italian countryside, not to mention the many smaller and larger towns it weaves through along its way south. For Catholics, there’s the additional appeal of its long legacy as a pilgrimage to St. Peter’s in Rome. According to the official website for the pilgrimage, the route originated as a way to unite upper and lower Europe in the 7th century. Christians began using the route on their way to Rome around the turn of the second millennium, although – as a gardener informed us about two hours outside of Siena – the modern-day pilgrim’s route is really just one of the many paths those pilgrims would take south. Indeed, the medieval pilgrimage to Rome went along the Via Cassia, which is now a major freeway. “You’d be crazy to try and walk that way anymore,” the gardener told us.

The route that’s maintained nowadays is crossed daily by dozens of pilgrims – mostly Italians, though the occasional non-Italian European may be encountered as well – and traces its way from one city or village along the path to the next. San Gimignano and Siena, our group’s starting and ending points, respectively, are pretty large towns by Tuscan standards; Monteriggioni, on the other hand, is almost comically small, with its one main piazza surrounded by a handful of alleyways, and immediately afterwards by fortress walls. “It’s a Tuscan-village theme park,” one of my friends joked when he realized just how little it was.

Many pilgrims take the route by themselves – a practice also common along the Camino de Santiago, a pilgrim route that is meant to trace the path taken by the apostle James through France and northern Spain. Given how little free time I had to walk, however, I wouldn’t have had much time to make friends with other pilgrims on the route – one of the reasons I’m glad I decided to go with others. 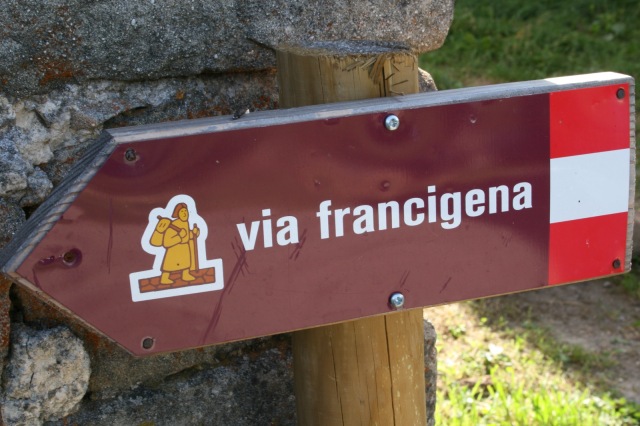 The walking itself was arduous, but not at all brutal. The Via Francigena’s main path is marked by red-and-white trail markers, and meanders up and down rolling hills, in and out of local farmers’ fields. We came across one rest area along the way to Siena, run by a local homeowner. He provides sandwiches and espresso to anyone who asks; in return, walkers can leave a donation and a thank-you note in his guestbook. The pilgrims’ lodgings we stayed at in Monteriggioni were clean and comfortable, with a small kitchen in which to prepare your own dinner and beautiful views of the church next door. In contrast, the pilgrim’s hostel in Siena (where I stayed last fall for a weekend, meeting many kind pilgrims and learning about the walk from them) provides a communal meal for guests. Unlike most rooms to rent in Italian cities, especially those where tourists tend to concentrate, prices for pilgrims along the Via Francigena are truly reasonable: bed spaces cost on average from 10 to 20 euros, and sometimes just a donation of your choosing is requested.

My friends and I walked 30 km (about 18 miles) the first day and, with a wrong turn, a bit more than 20 km (12 miles) the second; by the time we arrived in Siena, all of us were ready for a gelato break. We spent about an hour sitting in the city’s main piazza, the famous Piazza del Campo – where the annual Sienese horserace, the Palio, takes place every August – and then headed to the train station for our return trip to Bologna.

For Americans, the opportunity to take a pilgrimage doesn’t come every day. We have nature hikes and trails in the United States, but most of the historic religious paths crisscross the Old World, not the New. The Via Francigena is one of the lesser-known European pilgrimages, overshadowed by the Spanish Camino’s fame (the Camino was featured in “The Way,” a 2010 film by Emilio Estevez). Nonetheless, the Via Francigena provides a welcome respite from the day-to-day bustle of touring Italy: craning one’s neck around others to catch a glimpse of a statue by Michelangelo, maneuvering through the crowds that inevitably flock famous landmarks, eating overpriced pizza at a sit-down cafe. Besides all this, it offers the opportunity for reflection on life and faith, for those who seek it, along a route taken by countless Christians over the past thousand years. This medieval pilgrim’s path towards Rome is one budget-friendly way to see some of the Italian countryside – and to participate personally in an age-old phenomenon of Catholic faith.

Clara Dorfman is an American student studying in Italy. She walked a portion of the Francigena Way in May 2015.