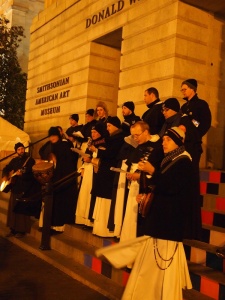 WASHINGTON (CNS) –- Amid the hustle and bustle of last-minute holiday shoppers, long lines of Capitals hockey fans waiting to get into the game, restaurant-goers and various street performers, a large group of  Dominican friars — accompanied by drum, guitars and banjo — spread some Christmas joy last night with their caroling on the steps outside the Smithsonian’s American Art Museum in downtown Washington.

Passers-by are “always positive. We’ve never had a negative response,” said Dominican Brother Timothy Danaher, who is in his sixth year with the religious order. He is studying for the priesthood at the Dominican House of Studies in Washington’s Brookland neighborhood, near the Basilica of the National Shrine of the Immaculate Conception.

The idea to take their singing to the streets started five years ago, Brother Timothy said, when the Dominicans were thinking of ways to evangelize, “especially outside the chapel walls.” And “we live right near the Metro (subway), so why not take Metro down and carol?”

The goal is twofold, he told Catholic News Service: “First and foremost is to do something that’s beautiful and gives people joy and to do that simply” — and be a Christian witness. “The second thing is to create conversation.”

In a city it’s especially hard to engage folks in conversation, Brother Timothy added, but with music, especially songs that people know,  people stop to listen. Other religious men and women join the Dominicans. Some of them sing carols with the friars but others join those Dominicans who are their to mingle with the crowd. 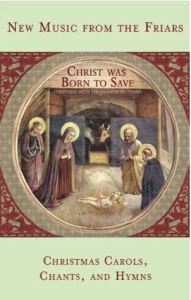 On Monday the Dominican brothers were joined by a couple of  Dominican Sisters of Mary, Mother of the Eucharist from Ann Arbor, Michigan, who are studying in Washington. Last night the friars were joined by Capuchin Franciscans from Capuchin College, also in the Brookland neighborhood.

And the friars’ singing isn’t limited to street performances. The Schola of the Dominican House of Studies just recorded its fourth CD, titled “Christ Was Born to Save,” with Christmas carols old and new. This CD, Brother Timothy said, was recorded in another Washington religious landmark in the neighborhood — the church at the Franciscan Monastery of the Holy Land — with the recording expertise of Dominican Brother Justin Bolger, a singer/songwriter. Information on the CD can be found online at Dominicana journal. It can be purchased at CD Baby or on iTunes. Proceeds go to support the Dominicans’ studies.