Poet and pope — or laureate and saint 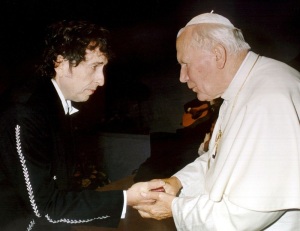 So Bob Dylan has been awarded the Nobel Prize in Literature. Some folks would have much preferred someone else had won. To others, it’s a welcome recognition of his lyric gifts.

Nineteen years ago, Catholic New Service ran a guest commentary by Ivan Kubista, then editor of The Courier, the newspaper of the Diocese of Winona, Minnesota, who recalled his college days when he and Dylan were classmates. Kubista also was a struggling folk singer trying to land a few gigs to pay for college tuition. He sometimes shared a stage with Dylan in their native Minnesota. When Dylan announced he was dropping out of school to head to the West Coast to get a job as a backup musician, Kubista tried to discourage him. A couple of years later Dylan released an album of his own songs. “It was already apparent to me, if not to the rest of the world, that Bob’s genius was in his compositions, not his performing,” Kubista noted.

He described following Dylan’s career over the years and had high praise for his lyrics at least: “He has become a poet of the highest caliber, articulating the human condition with a clarity unmatched by any of his peers.”

Kubista’s reflections came on the eve of Dylan performing before St. John Paul II — and about 350,000 of the pope’s closest friends — at a concert in Bologna, Italy, as part of an Italian eucharistic congress in 1997. It was heralded as the first rock concert ever attended by the pope, or any pope for that matter. There was a to-do over the appropriateness of Dylan being invited to perform at a religious gathering, but it never reached the controversy of Dylan “going electric” at the 1965 Newport Folk Festival.

Dylan was invited because his music was “true and beautiful” and “the church welcomes whatever is true and beautiful and good,” said Msgr. Ernesto Vecchi, a vicar of the archdiocese. Dylan sang “Knockin’ on Heaven’s Door, “A Hard Rain’s a-Gonna Fall” and “Forever Young” in his set, and shook St. John Paul’s hand. The pope acknowledged the true of the refrain of one Dylan staple, “The answer, my friend, is blowin’ in the wind.” “Not, however, in the wind that blows everything away into nothingness,” he said, “but in the wind that is the breath and voice of the Spirit, the voice that calls and says, ‘Come!'”

Then there was Dylan’s “born-again” period. Sometimes people turn to religion when they’ve reached a low ebb. His 1978 studio album, “Street-Legal,” was poor compared to the  masterwork “Blood on the Tracks” just three years prior, and his “Live at Budokan” followup was nearly unlistenable. But then comes a new Dylan, and his “Slow Train Coming” garnered at least as much debate as it did sales, reaching No. 3 on the U.S. charts and gaining platinum status. “Saved,” which mined the same field of Christian rock,” didn’t fare as well, and “Shot of Love” sold even fewer copies.

But “Infidels” got Dylan back to gold-record status. Although he didn’t do such overtly Christian albums again, you could still see elements of faith every now and again in his subsequent work.