GUATEMALA CITY — The plane landed at the Guatemalan Air Force airfield behind Guatemala City’s commercial airport and its weary-eyed passengers disembarked onto the tarmac in a straight, organized line.

Father Mauro Verzeletti, director of the Scalabrini Missionaries’ Migrant Shelter, confers with staff as they wait for the planeload of recently deported migrants to be processed and released from the immigration hall. (CNS/Judith Sudilovsky)

One by one, these 200 mostly young men recently deported from the U.S. filed into the receiving hall past us — three journalists participating in a Catholic Relief Services Egan Fellowship to Guatemala and Honduras to learn about the push factors for migration; one feisty Brazilian Scalabrini priest who directs a shelter for migrants; and Lucrecia Oliva, a CRS consultant on migration issues.

As each person entered they were registered by Guatemalan immigration officials before they could leave. Oliva greeted them with a polite “Good afternoon.” She had met with groups of expelled migrants before, but she had not seen them as they first returned.

Now she blinked heavily to keep back the tears.

This time it was different. She saw their individual faces. They were tired and scared. A few were, at least temporarily, jubilant and brash.

Four days a week, three times each day, flights arrive full of migrants deported from the U.S. For many of the young men it was not their first return trip home.

One man, 27, who had lived in New York for 11 years, said he might try to take the perilous journey across Mexico again as soon as the next day.

Though most people we spoke with agree that violence in Guatemala is not as serious as in neighboring El Salvador and Honduras, it does exist. Some of the youth may have been escaping gang or drug violence; others came seeking work to support their families in a country where half of the children suffer from chronic malnutrition.

A new government has been in power for less than a year, after the former president, vice president, and half of their cabinet were forced from office and are now serving prison terms for financial corruption. The new leaders have promised to tackle some of Guatemala’s pressing needs, but assert that it will take time to correct even the smallest of the ills of their predecessors who left the national till empty. People are waiting to see what actually gets done. 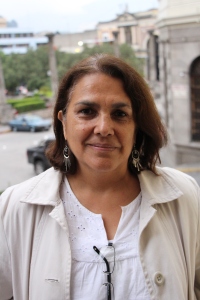 Oliva said she can understand the need Americans feel after 9/11 for security and caution about who enters their country. However, she realizes that the times have changed since she was given generous assistance when she landed in the states years ago and how it seems that Americans have forgotten their history as a land of immigrants.

She was an undocumented migrant, fleeing her homeland when Guatemala’s military dictatorship ravaged the country, killing those who dared to speak out demanding justice and equality. As young idealistic university students, she and her husband decided to leave for the U.S.. They left behind their young daughter who eventually joined them. Oliva also gave birth to another daughter.

She spent 18 years in Chicago where a family welcomed her and initially gave her work as a nanny for their baby daughter, eager for her to teach the girl Spanish. Oliva became an active member of church in a Mexican neighborhood, helping migrants even less fortunate than she was.

She never felt she was doing enough though.

In 1986 she was able to gain legal residency in the U.S., but in 1998 her heart told her to return to Guatemala and contribute to improving life in the country she loves.

“I was so young, and when I came to the United States people were so good to me, they helped me, I had that gift, and now I saw how these people were so rejected and that hurt me,” she explained. “Maybe they were not escaping violence, but they were escaping for a reason and now their dreams are shattered. It pained me that they were returning to their same reality.”

Though the story of migrating people who are seeking brighter horizons is not a new phenomenon, she said, it has become more public because of social media and the internet. As long as Guatemalan society does nothing to improve the social and economic inequalities or increase job opportunities for rural communities, migration will always remain an option, she said.

“We are wasting the lives of these youth and people. We are turning our backs on them. We are pushing them to leave because we as a country are not offering them a quality of life to reach their dreams and the ability to have land, human rights, education, and proper health care among others,” Oliva said.

So she is taking responsibility. Next week she also will begin working with the Scalabrini Missionaries’ Migrant Shelter with whom CRS works to facilitate job placements for returning migrants.