A bishop’s commute across the river and into the mountains 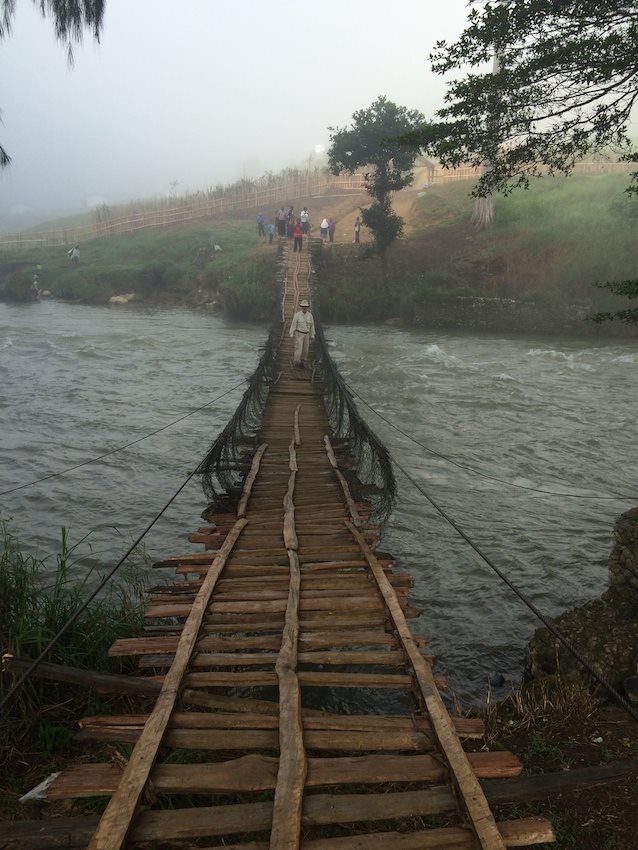 Before complaining about the traffic on your way home, you may want to look at Bishop Donald Lippert’s commute in Papua New Guinea, near Australia. Recently, those who follow him on Twitter witnessed the Franciscan Capuchin priest’s trek across a fragile foot bridge and into the mountains of the Diocese of Mendi.

He was commuting, if you will, to St. Michael Church, Kurumb, on a steep mountain highland, accessible not by car, but by an hour-and-a-half walk. The effort, taken along with an entourage from the Diocese of Mendi, was to confirm “almost 200 young people (and a few young at heart),” on the feast of Corpus Christi, the bishop said by email.

The group started out by car.

“After about an hour and a half through mountain roads and beautiful scenery, we arrived as far as we could go by road. We left the car and began the walk,” Bishop Lippert said. “Before starting our way up the mountain we had to cross the Lai River, on a rather rickety foot bridge. I tried not to look down, because the water rushing by underneath made me a bit dizzy, but there were big gaps in the planks on the bridge, so I could not avoid it. Of course, the local people crossed with ease — and so they gave me the nerve to make it across safely.”

His Twitter feed features photos of the bishop along the way: on the bridge, meeting friends, and continuing on in the rural diocese where the native of Pittsburgh, Pennsylvania has served since 2007. At the entrance to the group’s destination, parishioners welcomed the group with drums and chants. Many parishioners donned the traditional attire.

“One of them (Raphael) gave me a hat adorned in a traditional way with feathers. He said that it represented the fact that I was the ‘chief’ of the Catholic people of the province. I was humbled and honored by the gift,” Bishop Lippert wrote.

The Corpus Christi commute led to a homily about “the Eucharist as food for our journey and the Holy Spirit as fire for our mission of bringing the good news to all people,” wrote the bishop, who puts mileage with his feet behind those words.

“Some were visibly moved by this important moment in their lives.  Their eyes filled with the hope and promise of a life lived in the Lord — despite many challenges and difficulties,” he said.

After the ceremony and fellowship, “we began our trek back down the mountain,” he said. “I must confess that, as in other such occasions, I felt a bit like Peter, James and John must have felt, as they walked with Jesus back down Mount Tabor after having experienced the glory of the Transfiguration.”

Associate Editor at Catholic News Service in Washington. You can find me on Twitter @CNS_Rhina
View all posts by Rhina Guidos →
This entry was posted in CNS. Bookmark the permalink.