Proclaiming the Holy Year at the Holy Door

VATICAN CITY — Saturday evening, in front of the Holy Door in the atrium of St. Peter’s Basilica, Pope Francis’ will give the archpriests of the major basilicas of Rome copies of his “bull of indiction,” or formal proclamation, of the Holy Year of Mercy. An aide will read portions of it at the door before participants process into St. Peter’s for evening prayer. 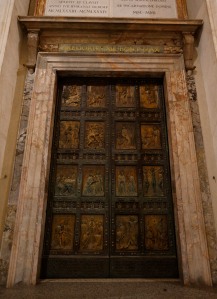 The site chosen for the brief rite was not made casually; the door symbolizes a passage or transition into a special year of evangelization and prayer.

Pope Francis will be back at the door Dec. 8 to formally open it and the Year of Mercy.

Popes typically announce a jubilee every 25 years, although extraordinary Holy Years have been proclaimed for special anniversaries — for example, a Holy Year was celebrated in 1983 to commemorate the 1,950th anniversary of Christ’s death and resurrection.

The Holy Door is opened to evoke the concept of forgiveness, which is the main focus of a Holy Year.

According to “Mondo Vaticano,” a mini-encyclopedia published by the Vatican, the designation of a Holy Door may trace back to the ancient Christian practice of public penitence when sinners were given public penances to perform before receiving absolution.

The penitents were not allowed to enter a church before completing the penance, but they were solemnly welcomed back in when their penance was fulfilled. Still today, Holy Year pilgrims enter the basilica through the Holy Door as a sign of their repentance and re-commitment to a life of faith.

Both the opening and closing of the Holy Door take place with formal ceremonies to mark “the period of time set aside for men and women to sanctify their souls,” the book says.

The ritual for opening the Holy Door at St. Peter’s Basilica goes back to 1499 when Pope Alexander VI opened the door on Christmas Eve to inaugurate the Holy Year 1500. This was when the door was wooden.

The bronze door panels that stand at St. Peter’s today, made by Vico Consorti, were consecrated and first opened Dec. 24, 1949, by Pius XII in proclamation of the 1950 Jubilee, a scene represented in the bottom right panel.

For centuries, the doors were opened with a silver hammer, not a key, “because the doors of justice and mercy give way only to the force of prayer and penance,” the encyclopedia says. Opening the Holy Year 2000, St. John Paul used neither a hammer, nor a key, but strongly pushed the door open. 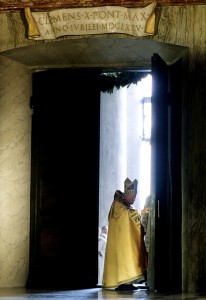 The theme of human sin and God’s mercy is illustrated in 15 of the 16 bronze panels that make up the current door, with episodes from both the Old and New Testament, including the Fall of Adam and Eve, the Annunciation, and the Merciful Father (and Prodigal Son).

Between the panels on the door at St. Peter’s are little shields with the coats of arms of all the popes that opened it during the ordinary Holy Years, the last being St. John Paul. Pope Francis’ coat of arms will be etched onto one of the empty shields that remain for future jubilee years after he opens and closes the door.

Pope Francis will give the “bull of indiction” also to the archpriests of the Rome basilicas of St. John Lateran, St. Paul Outside the Walls and St. Mary Major, which also have Holy Doors that are opened during jubilee years. The only other Holy Doors in the world are at Quebec City’s Basilica of Notre-Dame de Quebec; the shrine of St. John Vianney in Ars, France; and at the Cathedral of St. James the Great in Santiago de Compostela, Spain.

Elliot Williams is a Communication major at Villanova University. He is originally from Abington, PA, and is studying abroad at Roma Tre University, while interning for Catholic News Service’s Rome bureau. Elliot is an avid Nutella fanatic.

5 Responses to Proclaiming the Holy Year at the Holy Door