When a presidential scandal stole the show from a pope 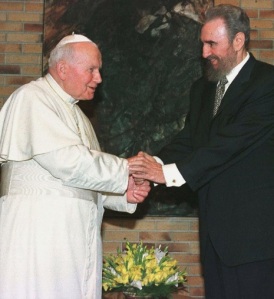 WASHINGTON — The announcement of the thaw in U.S.-Cuba relations — and Pope Francis’ role in it —  brought back memories of  St. John Paul II’s historic trip to Cuba in 1998.

But if journalism is the “first rough draft of history,” as the saying goes, this piece from the Catholic News Service archives sheds light on how a presidential sex scandal stole the limelight from a trip that might — in history — have bigger implications.

HAVANA (CNS) — When Pope John Paul II descended on Cuba, more than 2,000 journalists were waiting to cover what many news media considered the story of the year.

U.S. television networks rented out entire floors of Havana hotels. Camera crews jostled for the best positions on platforms at the airport arrival ceremony. Reporters combed the crowds for quotes. And then everyone went to work on what would surely be the lead story of the week.

A few hours after the pope arrived on Jan. 21, however, the U.S. networks pulled their anchors back home and scaled down their coverage: Allegations were surfacing that President Bill Clinton had had an affair with a White House intern.

It wasn’t long before former intern Monica Lewinsky enjoyed as much notoriety as Fidel Castro, and TV specials on “The Pope in Cuba” were replaced by reports on the presidential crisis.

For reasons that Vatican and Cuban officials may never understand, a Washington sex scandal had bumped the pope from the top of the news.

“I was very disappointed,” said U.S. Archbishop John P. Foley, the Vatican’s top communications official, who was a commentator for NBC News during the papal visit. “I thought it was an unfortunate indicator of priorities.”

Archbishop Foley said the pope’s trip was of tremendous significance for the United States and the world.

“Maybe this other event is historic, too, but I don’t think in the same dimension,” he said.

Vatican spokesman Joaquin Navarro-Valls made the best of it.

“All the same, we think the message is getting across, in and outside of Cuba,” he said Jan. 24 after being informed of the latest U.S. coverage cutbacks in Havana.

Enough of the media circus remained in Cuba, however, to provide an unprecedented look at Cuban society and its changing relationship with the Catholic Church.

This was a new experience for Cubans, who seemed to relish the attention. They invited reporters into their homes, churches and workplaces, even though most of them would never see or read the final journalistic product.

A nun waves a flag bearing the image of Pope John Paul II during his 1998 trip to Cuba. (CNS/Reuters)

Sometimes the media pressure got out of hand. One reporter said he showed up in a private home to witness a small ceremony of “Santeria,” Cuba’s popular mix of Catholicism and African religious rituals, and found the place crowded — with 30 other journalists.

Cuba’s state TV decided at the last minute to provide live national broadcast of all the papal Masses, which Vatican officials termed an important victory. The Communist Party daily Granma led with the pope every day, in bland reports that emphasized the pope’s position against the U.S. embargo and but virtually ignored his defense of basic human rights.

Meanwhile, Granma and the Cuban Catholic Church were engaging in a war of the Web sites, each putting up documentation about the papal visit beginning weeks ahead of the trip. The Granma site won points for layout and its interviews of Vatican officials, but the church site had more complete information and an animated logo that changed from the Cuban national emblem to the papal seal.

The Cubans’ press centers were models of efficiency and — a surprise to many — the phones and TV feeds actually worked. At Mass sites, reporters had security “minders” who tended to follow them around but did not interfere with their work. Cuban telecommunications made a killing, but kept long-distance rates reasonable for the visit.

The juxtapositions were everywhere, as in Santa Clara, where an Italian reporter was seen setting up his satellite phone next to a group of men watching a papal liturgy from a banana tree.

Most of the media would pull out soon after the pope left. But the spotlight they brought to the island appeared to have given Cubans a taste of much-appreciated world attention.