VATICAN CITY — The largest Franciscan church in the world needs help. And it has turned to the Internet’s modern-day system of patronage for the arts with Kickstarter. 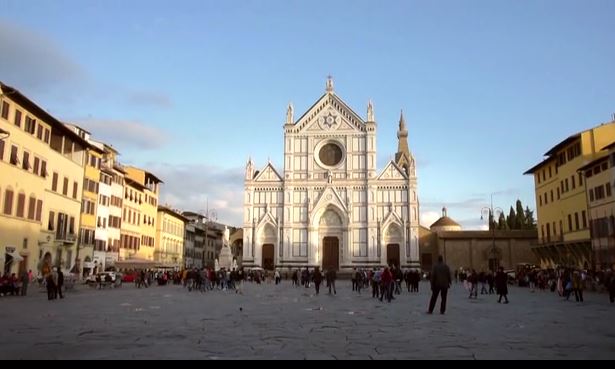 The facade of the Basilica of Santa Croce in Florence, Italy. (screen grab of video by Opera di Santa Croce)

The final resting place of Michelangelo, Niccolo Machiavelli and Galileo Galilei, the Basilica of Santa Croce in Florence is hoping to restore the loggia of a major chapel that was designed by Renaissance master Filippo Brunelleschi.

The 15th-century loggia of the Pazzi Chapel at the Basilica of Santa Croce is in urgent need of repair. (screen grab of video by Opera di Santa Croce)

The extensive and open loggia in front of the Pazzi Chapel is in urgent need of repair as the sandstone decorations and ceiling have been crumbling and deteriorating over time. 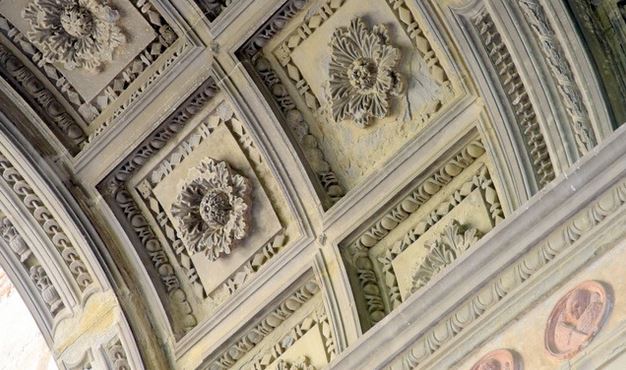 The loggia’s sandstone vault and decorations need cleaning and repair to reverse the wear and tear of time. (photo from Opera di Santa Croce’s Kickstarter page)

In an effort to drum up the needed funding for restoration, the non-profit “Opera di Santa Croce” organization, which is in charge of the Santa Croce complex, has turned to Kickstarter for help.

The organization has until Dec. 20 to raise $95,000 — the last half of the total money needed after it fund-raised from larger donors. As of Dec. 1 they were barely a third of the way there with 337 backers.

The NGO says it’s not the first time the church has had “crowd funding” for a restoration. According to its Kickstarter page:

“In 1860, hundreds people from all across Italy responded to an open call published in national newspapers to help build a new façade for the church. The sums pledged ranged from just one lira to 358,168 lira! All of these participants are recorded in the historical archive in leather-bound books.”

A lesser well-known church owned by the Franciscans in Rome used Kickstarter this spring to raise the quarter of a million dollars it needed to fix the crumbling cell St. Francis of Assisi used to sleep in when he’d come to the Eternal City.

The organization can be followed on Facebook and Twitter, and it is hoping people will help raise awareness about the restoration project on social media with the hashtag #CrazyForPazzi — a cute play on words since “crazy” in Italian is “pazzi.” Pazzi is the last name of the Renaissance Italian benefactor who commissioned Brunelleschi to build the chapel.

A video highlighting the importance of the chapel, its loggia and the restoration can be seen here.