WASHINGTON –- As a way to commemorate the 400th anniversary of the death of religious painter El Greco, the National Gallery of Art is opening an exhibit dedicated to his artwork next month.

The exhibit is to open to the public Nov. 2 and will remain open until Feb. 16 of next year. 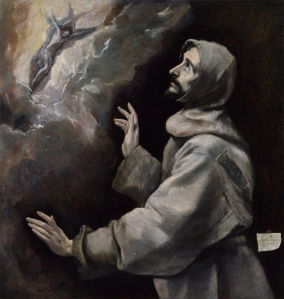 Prior to the official opening of the exhibit, the press got a sneak peek during a preview Oct. 28. The event was held in the West Hall of the building, beginning with a small breakfast that  was immediately followed by remarks from Earl A. Powell III, who is the director of the National Gallery of Art, Ambassador Ramón Gil-Casares of Spain, and David Alan Brown, the gallery’s curator of Italian and Spanish paintings.

The exhibit consists of a collection of 11 of El Greco’s paintings – including, “The Holy Family With St. Anne and the Infant John the Baptist,” “Madonna and Child With St. Martina and St. Agnes,” “St. Martin and The Beggar,” “The Visitation,” “Laocoön,” “St. Ildefonso,” “St. Francis Receiving the Stigmata,” “St. Jerome,” “The Repentant St. Peter” and “Christ Cleansing the Temple.”

To complement the paintings, a 30-minute short film called “El Greco: An Artist’s Odyssey” also will be included as a part of the exhibition.

According to Brown, El Greco’s paintings are “displayed in the exhibition based on various themes and issues.” The works come from the gallery’s own collection as well as from two other Washington art museums — the Phillips and Dumbarton Oaks — and from the Walters Art Museum in Baltimore.

In many of El Greco’s paintings, he portrays various scenes from stories known throughout the history of Christianity. 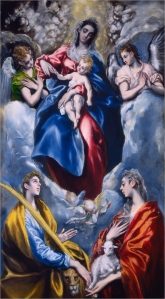 “Madonna and Child With St. Martina and St. Agnes” (Courtesy/National Gallery of Art)

El Greco’s “Madonna and the Child with Saint Martina and Saint Agnes” and “ St. Martin and the Beggar” are the two largest paintings in the exhibition, both measuring approximately 76 x 40 inches, according to the National Gallery of Art.
Both of these paintings used to hang opposite one another in the Chapel of St. Joseph in Toledo, Spain. The painting “Madonna and the Child With St. Martina and St. Agnes,” shows Mary and the child Jesus framed by angels and a billow of clouds. St. Agnes is on the right holding the lamb that appeared at her tomb after her death. Beside her, standing by a lion, is believed to be either St. Martina or St. Thekla, who appeared to St. Martin in visions.

The painting “St. Martin and the Beggar” shows St. Martin of Tours as a soldier when the Romans ruled what is present-day France. In the painting, the saint is on a horse, cutting his cloak in half to share with a beggar on the side of the road. The painting is a visual representation of the scriptural passage, “What thou hast done for the poor man, thou hast done for me.”

El Greco’s paintings have been described as “complicated and contradictory,” appealing to only certain people, and “possessing a haunting intensity” that is demonstrated with long wiry figures and strong contrasts of color and light.

El Greco is regarded as a “master painter” whose style, the National Gallery of Art notes, “captures the religious fervor” of the Counter-Reformation in Spain during the 16th century.