Crowded streets, churches attest that Holy Week and Easter have never been more alive in this El Salvador city

SOYAPANGO, El Salvador — The Easter Bunny doesn’t live here. There are no egg hunts, no large bags of candy for sale or Easter baskets or bonnets in these crowded streets. But there are crowded churches and the advent of Easter has never been more alive. 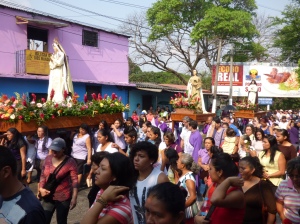 In El Salvador, which means “The Savior” in Spanish, and which is named after Christ, Holy Week leading up to the Easter Vigil, the big event here, is bigger than Christmas, New Year’s and Easter combined.

In Soyapango, people take most, if not the entire week off of work, and attend about 30 different public acts.

“It’s not a family holiday in the sense that people don’t spend their time around a table with food,” said Father Estefan Turcios Carpaño, the parish priest at San Antonio Parish in Soyapango, the third largest municipality in the country with about 290,000 predominantly Catholic residents.

Parishioners spend their time at a different table, the table of the Lord, he said.

Lines for those waiting for the sacrament of reconciliation have been long, leaving many to wait an hour or two, or longer, for confession. On Thursday, the Metropolitan Cathedral of San Salvador ran out of hosts for those who attended the chrism Mass in the capital nearby.

It’s hard to move through the streets because they’re swollen with the faithful participating in the religious processions, and even the smaller events, such as the re-enactment of Jesus in the olive grove. There are crosses everywhere, reminders of how special this time is, even inside the small sauna of a nearby holistic center. 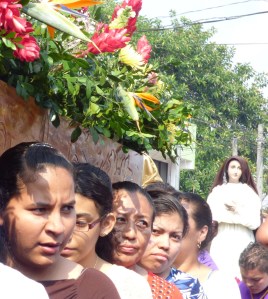 San Antonio can only accommodate about 2,000 to 3,000 at a time in the main church. While it would be enviable to any pastor, the parish faces a problem of physical space.

The church swells so much during Holy Week that Father Turcios has had to employ the help of other priests to celebrate Mass and Holy Week events in separate events in nearby neighborhoods, to stave off people from the main church.

He has found a way to broadcast parts of the celebration on a Facebook page, so that everyone will be comfortable and able to listen and reflect during this important holiday.

Helen Girón, 27, was born and grew up in the United States, until her family moved from Texas to El Salvador about a decade ago. Back in Texas, the celebrations focused on one day, Easter Sunday, she said. And it always felt a bit more focused on the material, on what Easter accoutrements could be bought and sold in the stores, she said.

Another scene of the crowded streets on this Good Friday. (CNS photo/Rhina Guidos)

Father Turcios quotes Pope Francis to illustrate the fervor behind his parishioners: “No one is saved by himself.” We are saved, he said, as “a community of believers.”

It might be uncomfortable at times, said Irma Vargas, one of parishioners, about the elbow to elbow space inside and outside, but the music, the liturgy, the excitement of so many people is “like rainwater that gives life to a plant,” she said.

Guidos is an editor at Catholic News Service. For more photos of Holy Week in El Salvador, follow her on Twitter @Catholic_Editor.

Associate Editor at Catholic News Service in Washington. You can find me on Twitter @CNS_Rhina
View all posts by Rhina Guidos →
This entry was posted in CNS, Holy Week, Latin America. Bookmark the permalink.
Loading Comments...
%d bloggers like this: