“Listen to your grandparents!” and other papal words of wisdom for kids

VATICAN CITY — The success of a kids’ comic book about Pope Francis has prompted its Italian publisher to turn it into an app for the English-speaking world. 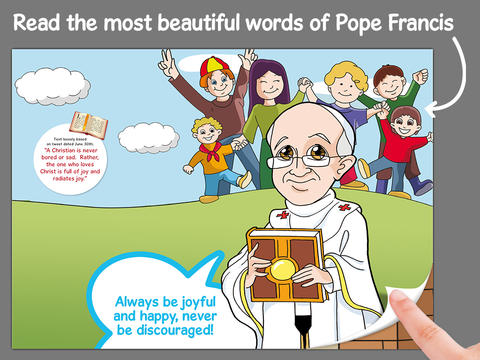 Called “Pope Francis Comics,” the app offers a kid-friendly mini-bio of the Argentine pontiff and 13 catchy phrases based on tweets or speeches by the pope. Kids can test how well they remember the messages with a fill-in-the-blank and coloring game.

There is also a full-color, eight-page comic book meant for older adolescents.

While the story is a bit far-fetched (the pope plots an unrealized late-night escape to help the poor with his assistant, Corrado, and encourages Corrado to reprimand any cardinals he sees giving too little money to people on the street), it gets the point across that charity and prayer are important in a world with so much suffering.

It’s a cute and easy-to-use app, but probably a bit over-priced ($2.99) for the small amount of content and limited features. However, the publishing house tells me the app will have automatic updates and will provide new features. Right now, it feels much like the newsstand magazine it’s based on, but without the cool mazes and fun stickers.

In any case, it’s a nice attempt and a good model for new ways to reach young children with the teachings of a pope whose speaking style is already well-suited for kids.

What faith-based apps do your kids use and love? Share some of their favorites with us here!

2 Responses to “Listen to your grandparents!” and other papal words of wisdom for kids