Top 13 quotable quotes by Pope Francis on sanctity of life

VATICAN CITY — Top 13 quotable quotes from Pope Francis on the sanctity of life:

2.  “All life has inestimable value even the weakest and most vulnerable, the sick, the old, the unborn and the poor, are masterpieces of God’s creation, made in his own image, destined to live forever, and deserving of the utmost reverence and respect.”

— Message to Catholics taking part in annual Day for Life in Britain and Ireland July 28, 2013

4. “Every child who, rather than being born, is condemned unjustly to being aborted, bears the face of Jesus Christ, bears the face of the Lord, who even before he was born, and then just after birth, experienced the world’s rejection. And every elderly person…even if he is ill or at the end of his days, bears the face of Christ. They cannot be discarded, as the ‘culture of waste’ suggests!”

5. “All too often, as we know from experience, people do not choose life, they do not accept the ‘Gospel of Life’ but let themselves be led by ideologies and ways of thinking that block life, that do not respect life, because they are dictated by selfishness, self-interest, profit, power and pleasure, and not by love, by concern for the good of others.

…As a result, the living God is replaced by fleeting human idols which offer the intoxication of a flash of freedom, but in the end bring new forms of slavery and death.”

6. “Unfortunately, what is thrown away is not only food and dispensable objects, but often human beings themselves, who are discarded as ‘unnecessary.’ For example, it is frightful even to think there are children, victims of abortion, who will never see the light of day; children being used as soldiers, abused and killed in armed conflicts; and children being bought and sold in that terrible form of modern slavery which is human trafficking, which is a crime against humanity.”

7. “Among the vulnerable for whom the church wishes to care with particular love and concern are unborn children, the most defenseless and innocent among us. Nowadays efforts are made to deny them their human dignity and to do with them whatever one pleases, taking their lives and passing laws preventing anyone from standing in the way of this.

…Precisely because this involves the internal consistency of our message about the value of the human person, the church cannot be expected to change her position on this question… It is not ‘progressive’ to try to resolve problems by eliminating a human life…”

Pope Francis blessing a sick man inside the Basilica of Our Lady of Bonaria in Cagliari, Sardinia, Sept. 2013. (CNS photo/Paul Haring)

8. “The victims of this [throwaway] culture are precisely the weakest and most fragile human beings — the unborn, the poorest, the sick and elderly, the seriously handicapped, etc. — who are in danger of being ‘thrown away,’ expelled from a system that must be efficient at all costs.

…It is necessary to raise awareness and form the lay faithful, in whatever state, especially those engaged in the field of politics, so that they may think in accord with the Gospel and the social doctrine of the church and act consistently by dialoguing and collaborating with those who, in sincerity and intellectual honesty, share — if not the faith — at least a similar vision of mankind and society and its ethical consequences.

— Speech to a delegation from the Dignitatis Humanae Institute Dec. 7, 2013 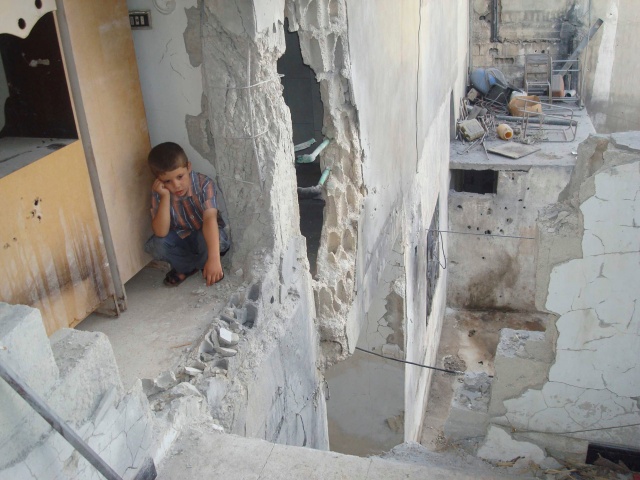 A boy sitting at his parents’ house damaged by shelling near Homs Aug. 2012. (CNS photo/Shaam News Network handout via Reuters)

9. “We are called to reach out to those who find themselves in the existential peripheries of our societies and to show particular solidarity with the most vulnerable of our brothers and sisters: the poor, the disabled, the unborn and the sick, migrants and refugees, the elderly and the young who lack employment.”

— Message to the 10th General Assembly of the World Council of Churches dated Oct. 4, 2013

10. On the church supporting life: “This young woman had the courage” to carry her baby to term and not have an abortion, Pope Francis said. But this example of an unmarried woman who sought baptism for her baby, “what does she find? A closed door. And this happens to a lot of people. This is not good pastoral zeal. This pushes people away from the Lord.”

— Homily during morning Mass May 25, 2013 in chapel of his residence 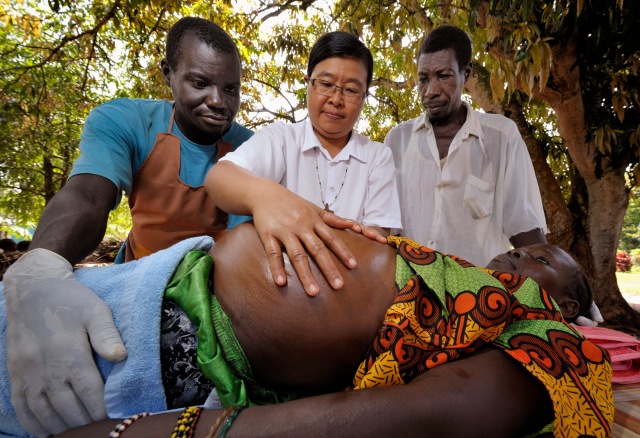 Sister Joana Mai Hla Kyi, a nurse and member of the Sisters of Our Lady of the Missions, demonstrating prenatal therapy in Riimenze, South Sudan, in this 2010 file photo. (CNS file photo/Paul Jeffrey)

11. The fight against abortion is “part of the battle in favor of life from the moment of conception until a dignified, natural end. This includes the care of the mother during pregnancy, the existence of laws to protect the mother postpartum, and the need to ensure that children receive enough food, as well as providing healthcare throughout the whole length of life…”

…On science being aware it is human life: “A pregnant woman isn’t carrying a toothbrush in her belly, or a tumor…We are in the presence of a human being.”

— Cardinal Jorge Bergoglio in book of interviews “Pope Francis: His Life in His Own Words”

12. “The right to life is the first human right. Abortion is killing someone that cannot defend him or herself.”

Caring for life from the beginning to the end. What a simple thing, what a beautiful thing..So, go forth and don’t be discouraged. Care for life. It’s worth it.”

—  from a homily in 2005 by Cardinal Bergoglio  celebrating Aug. 31  feast of St. Raymond Nonnatus, patron saint of expectant mothers, newborns