UPDATED Jan. 16: The animated GIF is comprised of a dozen or more still photo frames shot within about 4 seconds. Each was cropped exactly the same. One of these frames is the featured photo. Neither the GIF nor the main photo were taken from video.

VATICAN CITY — Photographers covering the Vatican are witnesses to both the grandeur and ordinariness of the events that unfold here.

In a display of the ordinary, today I shot this unusual frame of Pope Francis as he rubbed his face. 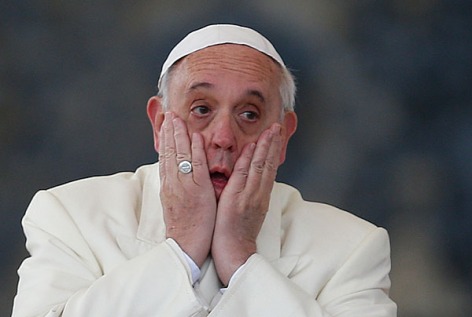 He had just finished delivering his blessing at the end of his catechesis at the Wednesday general audience. The 77-year-old pope first rubbed his eyes, then his face. It was essentially the pope’s four seconds of down time before spending the next hour and a half greeting bishops, people with disabilities and many others.

An animated GIF of Pope Francis taking a breather at the end of his catechesis. (CNS photos/Paul Haring)

My colleagues and I frequently see the pope doing ordinary human things: blowing his nose, taking a drink of water, scratching his face, etc…. We’ll sometimes photograph these moments but usually don’t use them. There is a certain sense of decorum among us — about what is appropriate for public consumption and what should be kept private.

In this case, the photo seemed to convey just how tiring it is to lead an audience and greet so many people outside in winter weather for two and a half hours.

My colleagues at the Rome bureau liked the photo because it showed a certain vulnerability. What do you think?

CNS Staff Photographer
View all posts by Paul Haring →
This entry was posted in CNS, Vatican. Bookmark the permalink.

77 Responses to Facing reality: popes have ordinary moments, too