Church-state cooperation on the world stage: one nation’s milestone

VATICAN CITY — It seems hard to believe, but it took 117 years for the United States to re-establish full diplomatic relations with the Vatican.

Decades of debate (that are periodically re-ignited) voiced concern that any formal relationship by the U.S. would signal improper government support of religion. The argument against has said that diplomatic ties were inappropriate because the Vatican, though constituted as a civil state, is the Holy See of the Catholic Church.

However, the increased push on the world stage by Blessed John Paul II and his predecessors for peace and human rights played a big role in building a sense of there being common ground and goals between the two countries.

The upgrading of relations with the United States was followed by a big expansion of the diplomatic corps to the Vatican.  Blessed John Paul’s pontificate saw a near-doubling of the number of countries with which the Vatican holds diplomatic relations. 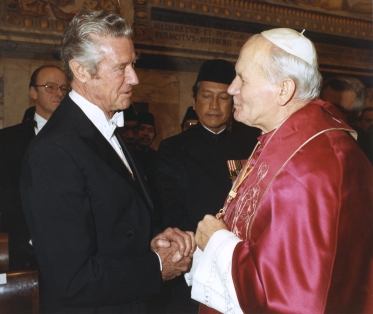 The late William A. Wilson was the first U.S. ambassador to the Vatican. He is greeted by Blessed John Paul II at the Vatican in this 1985 file photo. U.S. President Ronald Reagan named Wilson ambassador in 1984 after establishing full diplomatic relations with the Vatican. (CNS photo)

Today is the 30th anniversary of the official resumption of U.S-Vatican relations and we thought we’d dig into our CNS archives to see how we covered that historic moment.

First, the story from Washington covered by the intrepid Jim Lackey: (Click the link for a more readable pdf version: 1CNS_USVaticanRelations)

And here’s a look at Vatican reaction from the Rome bureau by John Thavis:

(Click the link for a more readable pdf version:  CNS_USVatican) 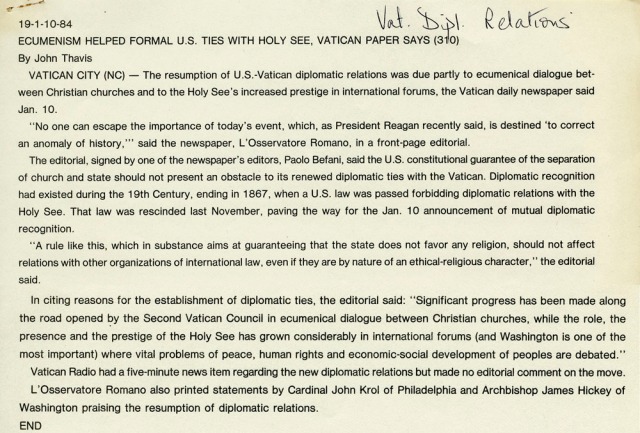 4 Responses to Church-state cooperation on the world stage: one nation’s milestone