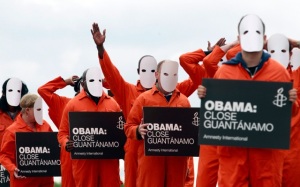 Masked activists from Amnesty International dressed as Guantanamo Bay detainees protest in Belfast Northern Ireland ahead of the Group of Eight Summit in mid-June. (CNS/Reuters)

Writing to Secretary of Defense Chuck Hagel June 25, Bishop Pates said detainees in the prison, some held without charges for up to 11 years, have basic human rights that must be upheld.

“I write to express my concern over the situation of detainees in Guantanamo Bay,” Bishops Pates wrote. Citing media reports of a continuing 140-day hunger strike by some of the 166 detainees, the bishop said the protest appears to stem in part from the fact that 86 of the men being held were cleared for release in 2010, “but remain confined in Guantanamo.”

The letter raised questions about the practice of “shackling and strapping down” some of the strikers to force feed them through a nose tube, a practice that the International Committee of the Red Cross has opposed.

“Rather than resorting to such measures, our nation should first do everything it can to address the conditions of despair that led to this protest,” Bishop Pates said.

“Detainees have a right to a just and fair trial held in a timely manner. For at least 86 detainees ‘a crime has not first been proven.’ The indefinite detention of detainees is not only injurious to those individuals, it also wounds the moral reputation of our nation, compromises our commitment to the rule of law and undermines out struggle against terrorism,” the letter said.

The letter was sent on the eve of the U.N. International Day in Support of Victims of Torture.

Catholic News Service’s Washington Letter this week will offer a review of the situation in Guantanamo and efforts to close the prison.