The cardinal walking in Piazza Navona who became pope 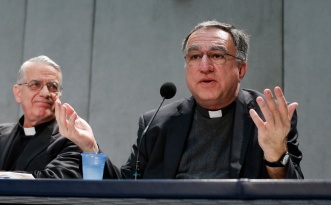 VATICAN CITY — Basilian Father Thomas Rosica, who has been helping the Vatican press hall during the interregnum, gave journalists his impressions of last night’s election of Pope Francis. We thought we would share his reflections with you here:

Sunday night we were working late and when I came out of the office, we walked over to Piazza Navona and we met Cardinal Bergoglio half the way and walked with him back to the Casa del Clero [the residence where the cardinal was staying]. We had a lovely conversation on the way. And just at the end, he took my hands and he said, “Pray for me.” And I said, “Are you nervous?” and he said, “A little bit!”

He’s a wonderful man I’ve known him since 2001 when I prepared World Youth Day. The simplicity is so striking and yet it is not a simplicity that’s without a solid foundation… I was stunned at what happened last night, absolutely stunned….

I didn’t expect the pontificate to begin with “buona sera” [good evening]. He chose not to follow the beautiful ritual in Latin. But it’s clear that he is the pastor who is coming to meet his people in the diocese of Rome.

And I close my eyes, and we shouldn’t make comparisons right away, but I couldn’t help but feel the presence of John XXIII, the smile of John Paul I, that courage and firmness of John Paul II and the solid-rootedness in Jesus Christ of Benedict XVI.

So what I found last night, and I thought about a long time when I finally got home at three o’clock this morning, is that the story continues: we have a pope and we have a shepherd and he’s going to build it on a solid foundation.