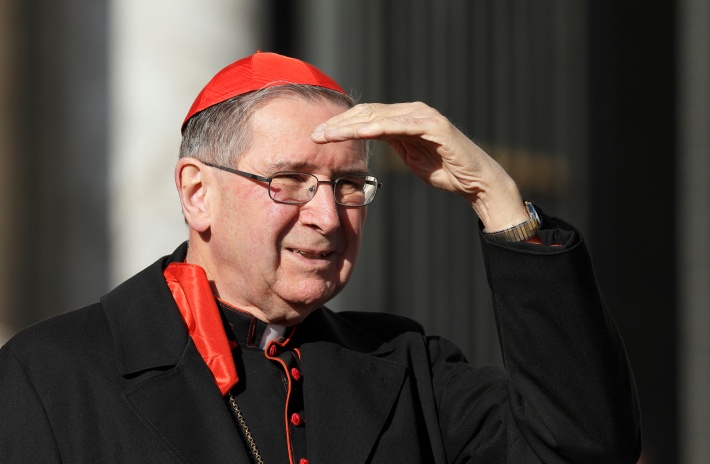 VATICAN CITY (CNS) — Cardinal Roger M. Mahony expressed “amazement” at calls that he withdraw from the upcoming papal conclave because of his record on clergy sex abuse, and said that the Vatican, acting through its ambassador to the United States, had instructed him to take part in the election of the next pope.

“I’m here because the Holy Father appointed me a cardinal in 1991, and the primary job of a cardinal, the number one job, is actually the election of a new pope should a vacancy occur,” the cardinal told Catholic News Service Feb. 28, two days after arriving in Rome.

“Without my even having to inquire, the nuncio in Washington phoned me a week or so ago and said, ‘I have had word from the highest folks in the Vatican: you are to come to Rome and you are to participate in the conclave’,” the cardinal said.

The Vatican spokesman, Jesuit Father Federico Lombardi, replied to a request for comment that the cardinal’s statement “can be understood in light of the communique of the Secretariat of State that insisted on the importance of not giving in to external pressures that might limit the freedom of the electors and the conclave.”

The communique in question, issued Feb. 23, defended the electors’ freedom as a “guarantee of a choice … based on evaluations addressed solely for the good of the church,” and condemned attempts to influence the papal election “through public opinion that is often based on judgements that do not typically capture the spiritual aspect of the moment that the church is living.”

Advocates for sex-abuse victims have urged Cardinal Mahony, 77, to abstain from voting in the election of a successor to Pope Benedict XVI because of evidence that he mishandled cases of pedophile priests during his time as archbishop of Los Angeles.

Acting under court order Jan. 31, the Archdiocese of Los Angeles released thousands of pages of personnel files which suggest that Cardinal Mahony, who retired as archbishop in 2011, worked to protect accused priests from criminal investigation beginning in the 1980s.

The cardinal’s successor, Archbishop Jose H. Gomez, cited the files when he announced that Cardinal Mahony would “no longer have any administrative or public duties” in the archdiocese. Archbishop Gomez later added that the cardinal remains a bishop in “good standing,” with “full rights to celebrate the holy sacraments of the church and to minister to the faithful without restriction.”

Cardinal Mahony said he was “amazed” at the controversy over the Los Angeles files, claiming that the salient information about sex abuse in them could be found in a 22-page report available on the archdiocese’s website since 2004.

“There are some new things in the files that came out, but as far as I know I don’t find anything in there disqualifying,” he said.

The cardinal said that criticisms of his record on sex abuse unfairly applied latter-day standards to what was normal practice at the time.

“People say, ‘well, why didn’t you call the police?’ In those days no one reported these things to the police, usually at the request of families,” he said. “What I did in those years was consistent with what everybody did, in the Boy Scouts, in public schools, private schools, across the country.”

Cardinal Mahony arrived in Rome the day after Scottish Cardinal Keith O’Brien, 74, announced he would not participate in the conclave because he did not want media attention focused on him, following reports that three priests and a former priest had accused him of “inappropriate conduct” with them going back to the 1980s.

(On March 3, Cardinal O’Brien publicly asked forgiveness for “times that my sexual conduct has fallen below the standards expected of me as a priest, archbishop and cardinal,” and announced that he would “play no further part in the public life of the Catholic Church in Scotland.”)