By Bishop Gerald F. Kicanas
One in a series

VATICAN CITY — Today was spent in our language groups meticulously considering each of the 57 propositions presented to the synod yesterday. All synod fathers have an opportunity to offer an amendment or ask to drop or to replace a proposition.

One realizes the different ways each reader views the wording of any proposition. The text is understood from the synod delegate’s perspective, affected by his experiences in his own diocese, the culture and society from which he comes. Yet we all hold a love for the church and a respect for her teaching that binds the group together. 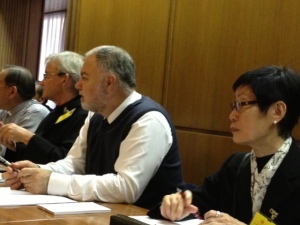 A view of our language group. (Photo by Bishop Kicanas)

Our English-language group reviewed the English translation of the propositions. One issue is the challenge and difficulty of translation. Some of the concerns raised had to do with how the translator understood the Latin text or the English text. It seemed to our group that greater benefit would come in addressing substantive issues rather than focus solely on concerns regarding individual word differences in the two texts. So that became our focus.

The Tower of Babel continues to influence our communication, which makes it so hard to fully understand one another. How beautiful is the rich diversity of the church felt here at the synod but how complicated it is to hear and understand one another even when everyone in our group speaks English.

The English spoken in our group is colored by Indian, Scottish, Thai, African, Ethiopian, Tongan, Filipino, Sri Lankan, and Malaysian accents and nuances. All of this adds rich color to the deliberations by the synod fathers’ efforts to formulate propositions for consideration by the Holy Father in his post-synodal exhortation.

Certainly the ultimate work of the synod is benefited by the eyes of each synod father reviewing the texts of the propositions and offering his perspective on the wide range of factors that affect the new evangelization. The diversity of the propositions provide each bishop with a wealth of directions for developing a pastoral plan for the Year of Faith that will give his diocese an opportunity to engage the new evangelization with  “new ardor, new methods, and new expressions.”

I enjoy so much the interplay of our group. We learn so much from each other in listening to the pastoral blessings and challenges faced in different parts of the world. For example, the forces of secularization are not as strongly felt in some countries as they are in the United States and Europe. Authority and respect are experienced in different ways. English words can have different connotations. This calls us to be more humble. As Americans we can think our way is the only way, but when the universal church gathers, as at the synod, you realize there are other legitimate, even wiser perspectives.

Cardinal Oswald Gracias, archbishop of Mumbai, India, our moderator of the small group, and Archbishop Philip Tartaglia of Glasgow, our rapporteur, are doing a masterful job bringing our group to consensus on the many helpful revisions that have been suggested. They show great patience in letting each synod father have his say and offer his perspective. I expect that the other 11 groups are experiencing somewhat the same in their deliberations.

This tedious and thorough process will benefit greatly the ultimate formulation of the final propositions. The synod process is a reminder of the importance of giving each person a voice and for all in the group to be working together toward a final resolution. This is an important lesson and an example for our councils and consultative bodies in the diocese and in parishes.

Our group went the longest, hopefully contributing substantially to the revision of the propositions. We had some great laughs and have come to appreciate one another’s company. A great rapport developed in the group and respect for one another grew. There was a comfortability between bishops, the men and women auditors and experts as well as the fraternal delegate, Rev. Dr. Timothy George of the Southern Baptist tradition who teaches at Beeson Divinity School in Birmingham, Ala.

Another view of our group. (Photo by Bishop Kicanas)

As we ended our work Cardinal Gracias asked Archbishop Malayappan Chinnappa of Madras-Mylapore, India, to close. He mentioned that everyone has a charism from God that he or she can share for the good of the community. He said his gift was the joy of singing and he wanted to conclude our work by singing a Tamil song in praise and thanks to God.

He broke into a beautiful song in his native language as his face was aglow with delight in sharing his music with us. Charisms can move hearts and he did move our hearts, a marvelous way to end our time together.

When I returned home I learned that the Holy Father unexpectedly had named some new cardinals including Archbishop James Harvey from the Archdiocese of Milwaukee who has served for many years in the Vatican and has been such a good friend to many. There will be much joy in this appointment.

Among the others named were four synod fathers I have come to know quite well: Archbishop Luis Tagle of Manila, whom we had hoped would preach this year’s priest convocation in Tucson but was not able; Archbishop John Olorunfemi Onaiyekan of Abuja, Nigeria, who as I mentioned in a previous blog referring to his reflection at the synod, has a brother in Tucson and has visited recently talking at our Youth Fest; Maronite Patriarch Bechara Rai, who had invited us to his home for dinner; and Syro-Malankaran Archbishop Baselios Cleemis Thottunkal, who also has a brother in Tucson and who has been a frequent visitor.

Bishop Kicanas, of Tucson, Ariz., is chairman of the board of Catholic Relief Services and is a former vice president of the U.S. Conference of Catholic Bishops. Also a former chairman of the U.S. bishops’ Communications Committee, he is blogging from the world Synod of Bishops this month by special arrangement with Catholic News Service. He was elected an alternate delegate to the synod by the U.S. bishops and became a full delegate when Cardinal Francis E. George was unable to attend.

4 Responses to Inside the synod: Small groups consider final propositions