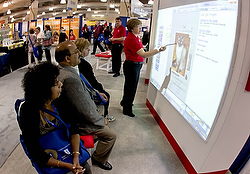 An NCEA exhibitor displays a SMART Board April 12. (CNS photo by Gregory Tracy)

The annual National Catholic Educational Assocation convention is not just about professional and spiritual development.

The exposition hall, a must stop for the 10,000 delegates at this year’s convention in Boston was filled with traditional student supplies:  uniforms, markers, books and art supplies. But vendors also were selling what schools need such as software, SMART boards,  scoreboards and desks.

Many of the booths lure potential buyers with free candy or other giveaways. The school fundraising vendors — especially those promoting candy bar sales — naturally draw a large crowd with bowls of samples on display.

Some vendors on the periphery of the hall, for example, felt they did not get enough foot traffic.

The range of products on display illustrates the immense role these educators have. There were tools for making handwriting easier and others for electronically keeping track of students’ volunteer hours. There were plenty of previously mentioned fundraisers in all shapes and sizes — promoting sales of free-trade coffee, organic products, candles, cookie dough and gift wrap — to name just a few.

By the convention’s end two booths had a particular appeal not for their location or their giveaways. One was selling comfortable footwear and the other offered nap mats.