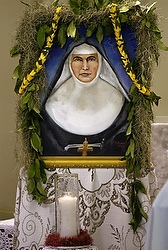 In the United States and Canada, many people are aware that the saints to be proclaimed Oct. 21 at the Vatican include Blessed Marianne Cope of Molokai and Blessed Kateri Tekakwitha.

Mother Marianne led a group of sisters from New York to the Hawaiian Islands in 1883 to establish a system of nursing care for leprosy patients; Blessed Kateri, daughter of a Christian Algonquin mother and a Mohawk father in upstate New York, will become the first Native American to be canonized. She was baptized by a Jesuit missionary in 1676 when she was 20, and she died in Canada four years later.

After the creation of new cardinals Saturday, the College of Cardinals gave their assent to the pope’s decision to make seven new saints this year. The other five who will be canonized in October are:

— Jesuit Father Jacques Berthieu, who was born in Polminhac, France, and was martyred June 8, 1896, in Ambiatibe, Madagascar.

— Father Giovanni Battista Piamarta, an Italian priest and founder of the Congregation of the Holy Family of Nazareth for men and the Humble Servants of the Lord for women. He died in 1913.

— Carmen Salles y Barangueras, the Spanish founder of the Sisters of the Immaculate Conception. She worked with disadvantaged girls and prostitutes and saw that early education was essential for helping young women. She died in 1911.

— Anna Schaffer, a lay German woman who wanted to be a missionary, but could not because of a succession of physical accidents and diseases. She accepted her infirmity as a way of sanctification. Her grave has been a pilgrimage site since her death in 1925.