GALILEE, Israel — The scene was one of tranquil beauty: In front lay the Sea of Galilee in all shades of blue, with a solitary boat floating on the calm surface of the lake. Beyond, in a blurry haze of pink and purple, were the mountains of the Golan Heights. To the right was the green valley of Ginossar and to the left, hidden by greenery, was Tabgha, where Jesus performed the miracle of the loaves and fishes. 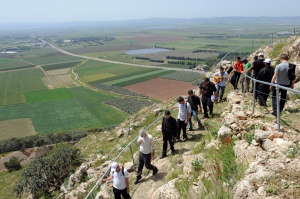 Students and journalists participate in a pre-launch tour of the Gospel Trail from Mt. Precipice, Nazareth, to the Jazreel Valley, April 14, 2011. CNS photo/ Debbie Hill

A group of 20 intrepid reporters had climbed up to the top of Tel Kinrot, an ancient archaeological site dating back to the Bronze and Iron ages, just above the shore of the Sea of Galilee, as part of the Israeli Ministry of Tourism’s inaugural event for the official opening of its new Gospel Trail, which marks the path Jesus might have followed when he left Nazareth and began his ministry.

While tourism ministry officials cannot be 100 percent sure of the exact trail Jesus took in his wanderings, they picked one which, according to topographical and Biblical research, seemed like a logical possibility, said Uri Sharon of the religious tourism department.

Tourism officials hope to encourage restaurants, shuttles and overnight accommodations along the path to help the local economy. Already, a small kiosk selling drinks and snacks at the edge of the small Bedouin village of Wadi Hamam at the foot of Mount Arbel is looking forward to an increase in business.

The trail starts at Mount Precipice, just outside Nazareth, and continues eastward to Capernaum, where Jesus established his ministry and met his first disciple Peter. Stops along the way include the Mount of Beatitudes, the home of Mary Magdalene, and Tabgha. A segment is also part of the national Israel Trail, which crosses the entire country.

An overview of Nazareth from Mount Precipice, Nazareth, where The Gospel Trail begins. CNS photo/Debbie Hill

Sitting at the festive lunch at the end the journey, retired Anglican Bishop Riah Abo el-Assal, retired Melkite Catholic Archbishop Pierre Mouallem and Melkite Archbishop Elias Chacour said they were glad to see effort spent to improve Christian pilgrimage. They were less enthusiastic about side industries such as bike riding and horseback riding, which they said were not suited for a contemplative pilgrimage experience along the trail.

The Gospel should come before the trail — and before the horses and the bicycles, said Bishop Abo el-Assal.

“I am happy they took this initiative to illustrate the fact that Jesus Christ was here and walked around this area,” said Archbishop Chacour. “Although there is the intention to commercialize these places, it nonetheless comes back to the real event of Jesus Christ spending his time around this lake, the most holy place in the Holy Land, where man has not yet changed the landscape.”