A visually splendid and intellectually satisfying introduction to Catholic Christianity is provided by the 10-part video series “Catholicism.” Written and hosted by Father Robert E. Barron, the complete documentary is available for purchase on DVD at Word on Fire, while four, hourlong episodes are airing on PBS affiliates throughout the month of October. (Check local listings or consult this online schedule for the program.) 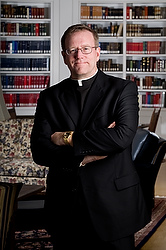 A priest of the Archdiocese of Chicago, Father Barron is certainly not lacking in academic credentials. He holds a doctorate in sacred theology from France’s Institut Catholique de Paris and serves as the Francis Cardinal George professor of faith and culture at the University of St. Mary of the Lake/Mundelein Seminary. He’s also been a visiting professor at the University of Notre Dame and Rome’s Pontifical University of St. Thomas Aquinas, colloquially known as the Angelicum.

Like his august – and equally well educated — forerunner Archbishop Fulton J. Sheen, however, Father Barron displays a knack for conveying complex ideas in easily grasped, television-friendly terms. His enthusiasm as a narrator also serves to keep the pace pleasingly rapid.

As he explores the identity of Jesus, the main topic of “Amazed and Afraid: The Revelation of God Become Man,” the first episode screened, the globetrotting Father Barron visits lushly photographed holy sites in Bethlehem, Galilee and Jerusalem before traveling on to various sacred locales around Rome. Classical religious artwork – smoothly panned and zoomed in the style justly known among broadcasters as the Ken Burns effect — provides further engaging imagery.

The substantive discussion carried on behind these visuals introduces viewers to the messianic expectations laid down in the prophecies of the Old Testament and to the surprising, sometimes paradoxical, manner in which Jesus — by his life, death and resurrection — fulfilled them.

A first-rate DVD resource for teen and adult religious education, whether in a parish setting or at home – and must-watch public television programming for all old enough to profit from it – “Catholicism” enlists sophisticated production values and an elegantly crafted script in the service of explaining — and celebrating — the faith.

8 Responses to ‘Catholicism’ series airing on PBS is ‘visually splendid’