Politics of peace? Patriarch’s visit does not include Washington

As Maronite Patriarch Bechara Rai begins a visit to the United States, one prominent city is missing from his itinerary. The patriarch will not be visiting Washington, D.C., nor will he be meeting with U.S. President Obama, despite a meeting Maronite officials said was scheduled at the White House for 2 p.m. Oct. 3.

To some, including Maronite Bishop Gregory J. Mansour of Brooklyn, this is a public rebuff. In a strongly worded open letter to Obama, Bishop Mansour called it “pure hypocrisy for the leader of the free world to refuse to meet with Patriarch Rai, especially since the prime minister of Israel can come and completely disregard essential parts of a peace plan and still be given a warm welcome, and the king of Saudi Arabia, where Christians have no freedom whatsoever, can be received with highest honors.” 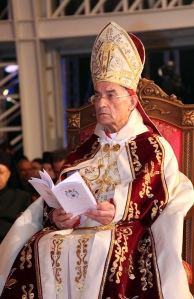 Why then, would Maronite officials be so incensed?

Chorbishop Michael Thomas, Bishop Mansour’s vicar general, told Catholic News Service that, last spring, after the new patriarch was elected, U.S. Transportation Secretary Ray LaHood, who is of Lebanese descent, visited the new Maronite leader to congratulate him. At that time, LaHood invited Patriarch Rai to visit Washington and meet with Obama, and the patriarch accepted.

Chorbishop Thomas said Bishop Mansour was given the Oct. 3 date early in September. He said that, early the week of Sept. 19, the U.S. ambassador to Lebanon visited the patriarch “to ask his stance on certain issues,” including Syria. Chorbishop Thomas said Lahood told Bishop Mansour Sept. 22 that Obama had no intention of meeting with the patriarch because of the Maronite leader’s stance on Syria.

Many Maronite officials, including Bishop Mansour, feel the patriarch is being punished for speaking honestly about the plight of Christians in Syria, where, like Iraqi Christians under Saddam Hussein, they have been somewhat protected by a dictator.

Archbishop Paul El-Sayah, former archbishop of Haifa, Israel, and now Patriarch Rai’s vicar general, recently told Catholic News Service’s Doreen Abi Raad: “The patriarch and the Maronite church are for the promotion of freedom, democracy and rights for all, and the church never supported any regime of any kind. We’re neither for nor against a regime. We judge a regime on its merits and how it deals with the values of freedom, democracy and rights.”

Speaking specifically about Syria, Archbishop El-Sayah said: “Change is important, and it should come about when those values are not honored. But we’d like to see peaceful change — change through dialogue, not through violence. And we are concerned also that violent change could lead to civil war.

“Everyone knows what kind of disaster civil war is,” he added. “Iraq is a very loud example. In Iraq the Christian minority paid a huge price. Two-thirds of Christians had to leave Iraq.”

UPDATE: A White House spokesman told Catholic News Service that the White House neither scheduled nor canceled a meeting with Patriarch Rai.

3 Responses to Politics of peace? Patriarch’s visit does not include Washington