VATICAN CITY — Pope Benedict XVI chose two women religious from the United States to be consultants to the Pontifical Council for Promoting New Evangelization: Sister Sara Butler, who teaches theology at the University of St. Mary of the Lake Mundelein Seminary in the Archdiocese of Chicago; and Sister Mary Lou Wirtz, the Rome-based president of the International Union of Superiors General. 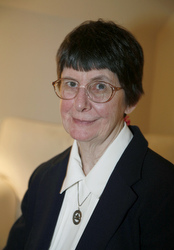 Sister Butler is a member of the Missionary Servants of the Most Blessed Trinity and a papally-appointed member of the International Theological Commission. Sister Wirtz is superior general of the Daughters of the Sacred Hearts of Jesus and Mary.

Two other women were among the 10 people named consultants to the new evangelization council today. Both are Italian laywomen. Chiara Amirante is founder of the New Horizons Association, which offers a practical and spiritual outreach to people experiencing difficulty often as a result of addiction. Lucetta Scaraffia, is a professor of contemporary history at Rome’s La Sapienza University and a very regular contributor to the Vatican newspaper, L’Osservatore Romano.