VATICAN CITY — After weeks of speculation, the Vatican press office announced the release dates of two documents that had the Catholic blogosphere abuzz: the Congregation for the Doctrine of the Faith’s circular letter to bishops’ conferences on preparing guidelines for dealing with the sexual abuse of minors by priests; and an instruction on implementing Pope Benedict XVI’s authorization of wider use of the so-called Tridentine Mass. 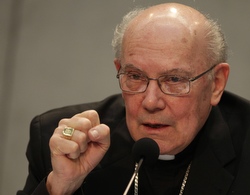 The doctrinal congregation’s document is being released Monday. U.S. Cardinal William J. Levada, prefect of the congregation, had announced in November that his office, which coordinates the church’s response to abuse cases, was preparing the document. Its purpose was to help every bishops’ conference in the world design a “coordinated and effective program” of child protection and of dealing with allegations. The guidelines are expected to address the issue of reporting allegations of sexual abuse to local law enforcement.

The document being released Friday is an instruction from the Pontifical Commission Ecclesia Dei, which oversees the use of the Mass according to the Roman rite used in the church prior to the Second Vatican Council. In 2007, Pope Benedict authorized widespread use of the old liturgy. Now, after almost four years of experience, the Vatican instruction aims to respond to questions that have arisen over the implementation of the pope’s permission.