Amid all the big, dramatic news dominating the world today, observing Cesar Chavez’s birthday March 31 is a reminder of the power of simple, grass-roots organizing and years of persistent plugging away for justice.

We live in times when a government can be overthrown in a matter of weeks by a Twitter-organized popular uprising. It’s a little hard to imagine the decades-long dedication with which Chavez and his followers worked to change the mistreatment, physical danger and scandalously low wages endured by farm workers in this country.

Though conditions are still far from ideal in U.S. agriculture, there’s been immense improvement. And the fight continues to be fought with the tactics developed by Chavez and what is now known as the United Farm Workers Union. For instance, grass roots-organized boycotts were responsible for the recent victories by Florida tomato workers in getting higher price guarantees from major restaurant companies, bringing up wages a crucial few cents per bushel.

The grape and lettuce boycotts of the 1960s, ’70s and ’80s led by Chavez were a core part of many Catholics’ introduction to the concept of practicing everyday social justice through their grocery purchases. Today such consciousness is played out in parishes around the country that ban plastic water bottles or that use and sell products like Catholic Relief Services’ Fair Trade coffee and chocolate. 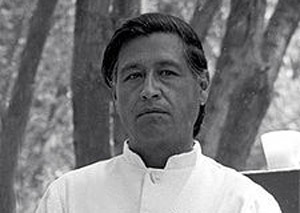 Photo of Cesar Chavez from exhibit at Los Angeles cathedral, by Victor Aleman.

Marking this year’s birthday, a proclamation of Cesar Chavez Day from the White House makes note of his “selfless and fearless leadership.” A photo exhibit at the Cathedral of Our Lady of the Angels in Los Angeles focuses on “Cesar Chavez as a champion of human dignity and justice.”

Chavez, who had his share of struggles with convincing some church leaders that his quest for justice was rooted in Gospel values, was always quietly public about his Catholicism. As he traveled around the country, he regularly stayed in parish halls and vacant convents; Mass with parishioners was a must. Shrines to Our Lady of Guadalupe were a regular sight at the farm workers’ activities. Chavez broke his hunger strikes with the Eucharist.

This prayer, attributed to Chavez, was a feature of this week’s communique from the National Catholic Rural Life Conference:

Show me the suffering of the most miserable, so I may know my people’s plight.

Free me to pray for others, for  you are present in every person.

Help me to take responsibility for my own life, so that I can be free at last.

Grant me courage to serve others, for in service there is true life.

Give me honesty and patience, so that I can work with other workers.

Bring forth song and celebration, so that the Spirit will be alive among us.

Let the Spirit flourish and grow, so that we will never tire of the struggle.