For 38 years, parish has provided hospitality to pro-lifers

By the end of today, volunteers in the parish hall at St. Peter’s on Capitol Hill will have handed out 175 dozen doughnuts, served gallons of hot coffee and hot water for tea and hot chocolate, and given out numerous small containers of juice  — all in the name of hospitality for pro-lifers coming to town for today’s annual March for Life.

Chartered buses started arriving around 4:30 a.m. and volunteers were already in the hall by 4 a.m., ready to offer refreshments and warm smiles to folks who traveled overnight to come to Washington to mark the 38th anniversary of Roe v. Wade. Pro-lifers come in waves throughout the morning and then head down to the National Mall for the noon rally, followed by a march up Constitution to the Supreme Court. St. Peter’s also offers four Masses.

Why do it? “Because the parish is always pro-life” and shows solidarity with the marchers, said volunteer Dr. Anthony Martinez. “It’s a full expression of our faith,” said coordinator Suzanne O’Connor. She said the parish has provided hospitality since the first anniversary of  Roe. But, she noted, it doesn’t happen without dozens of volunteers working throughout the day and helping in the days beforehand. 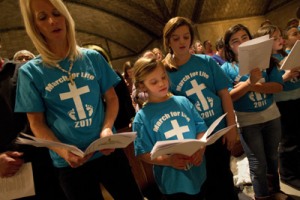 Members of the Winkhart family of Canton, Ohio, pray during the opening Mass of the National Prayer Vigil for Life at the Basilica of the National Shrine of the Immaculate Conception in Washington Sunday evening. (CNS/Nancy Wiechec)

This weekend in Washington there was a lot of pro-life activity, including the Cardinal O’Connor conference at Georgetown University and the all-night vigil at the Basilica of the National Shrine of the Immaculate Conception — not to mention marches and rallies around the country, including in San Francisco, where organizers said a Jan. 22 march drew a record crowd of at least 40,000 pro-life activists. “We are here to break the bondage of the culture of death,” Walk for Life co-chair Dolores Meehan said.