UPDATE: Our colleagues at the French Catholic news agency, I.Media, are reporting that the folks at St. Peter’s Basilica are already preparing for Pope John Paul II’s beatification.

Restoration work currently is underway on the altar and mosaic in the Chapel of St. Sebastian, which is between the chapel housing Michelangelo’s Pieta and the Blessed Sacrament Chapel. 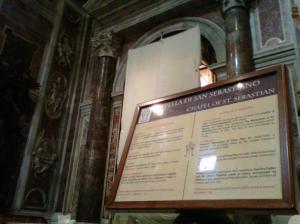 The mosaic over the altar in the Chapel of St. Sebastian is hidden by scaffolding. (CNS/Cindy Wooden)

The French news agency reported today that the work is being done to ready the chapel to welcome the body of “Blessed” John Paul II. (Already in 2008 there were reports that once he was beatified, his body would be moved from the grotto under the basilica to the Chapel of St. Sebastian. The move would ensure his final resting place would be more accessible to pilgrims.)

VATICAN CITY — As early as Friday, Pope Benedict XVI could formally recognize the miracle needed for the beatification of Pope John Paul II. 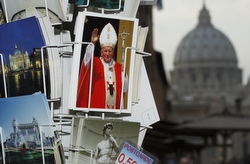 Just over a week ago, we cited a well-informed Italian reporter who said the only steps remaining in the acceptance of the miracle were the assent of the members of the Congregation for Saints’ Causes and the signature of the pope.

The same reporter, Andrea Tornielli, reported today that the cardinal- and archbishop-members of the congregation met yesterday and agreed.

Now a different informed source says that Cardinal Angelo Amato, prefect of the Congregation for Saints Causes, is scheduled to meet the pope Friday and present him with a number of decrees for his consideration. It seems the decree recognizing a miracle attributed to Pope John Paul will be among them.

11 Responses to A Pope John Paul miracle on Friday?