Did Pelosi’s meeting with the pope really happen? 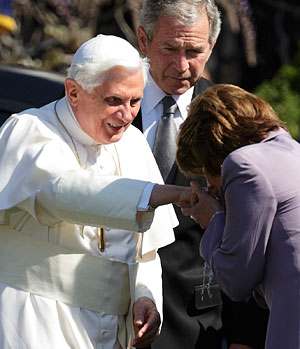 Speaker of the House Nancy Pelosi, seen with a rosary on her left wrist, kisses Pope Benedict XVI's ring during a welcoming ceremony for the pontiff on the South Lawn of the White House April 16, 2008. (CNS/Joshua Roberts)

When Speaker of the House Nancy Pelosi met Pope Benedict XVI on Wednesday, the meeting was closed to reporters and photographers. The Vatican did not release photos either, as is the normal custom when press photographers are not permitted. In fact, it appears that L’Osservatore Romano photographers, who capture almost everyone the pope meets, did not take photos of the encounter.

So why did Pelosi get the no-photos treatment?

Before Pelosi’s visit, false rumors had been swirling on the Internet that the pope was going to present her with an award. Instead, the pope told her that all Catholics, especially lawmakers, must work to protect life at every stage. The pope’s message to Pelosi, a Catholic Democrat, was clearly aimed at reversing her support for keeping abortion legal.

In not releasing photos, the Vatican minimized the encounter and at the same time carefully controlled perceptions of the meeting. A Vatican statement released after the meeting said the pope “briefly greeted” Pelosi. The statement said “His Holiness took the opportunity to speak of the requirements of the natural moral law and the church’s consistent teaching on the dignity of human life from conception to natural death.”

While the Vatican’s statement focused on abortion, Pelosi’s statement after the meeting had a different take. She said that she praised “the church’s leadership in fighting poverty, hunger and global warming, as well as the Holy Father’s dedication to religious freedom and his upcoming trip and message to Israel.”

Would a photo of Pelosi and the pope together change perceptions of their meeting? 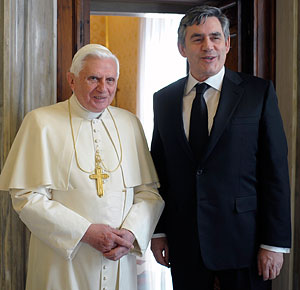 Pope Benedict XVI poses for a photo with British Prime Minister Gordon Brown during their meeting at the Vatican Feb. 19, one day after Pelosi got the no-photos treatment. (CNS/Reuters)

On walls throughout the world hang countless images of individuals meeting the pope. The formula used in the photos is tried and true: A smiling pope and a smiling subject meeting each other and shaking hands. The images convey an implicit connection with the pope and imply a sense of the pontiff bestowing his favor on the subject.

For all their simplicity, these images are very powerful. For many they are treasured keepsakes, but they are also used by countless people to promote themselves and their causes.

In not allowing photos of Pelosi meeting the pope, the Vatican recognized the power of the still image and its ability to be interpreted and used in many ways. Unlike a written statement, a still image is much more open to having many different interpretations. 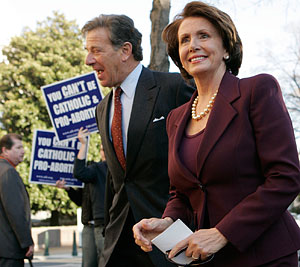 In her first week as the new speaker of the House, Nancy Pelosi encounters pro-life demonstrators as she arrives with her husband, Paul, at an interfaith service for members of Congress at St. Peter's Catholic Church near the Capitol in Washington Jan. 4, 2007. (CNS/Paul Haring)

Ironically, Pelosi showed the pope a photo of her at a papal audience with her parents in 1950s as well as a recent photo of her children and grandchildren. Clearly, photos are important to Pelosi and one wonders if she brought her own camera to document the occasion.

CNS Staff Photographer
View all posts by Paul Haring →
This entry was posted in CNS, Vatican. Bookmark the permalink.

33 Responses to Did Pelosi’s meeting with the pope really happen?